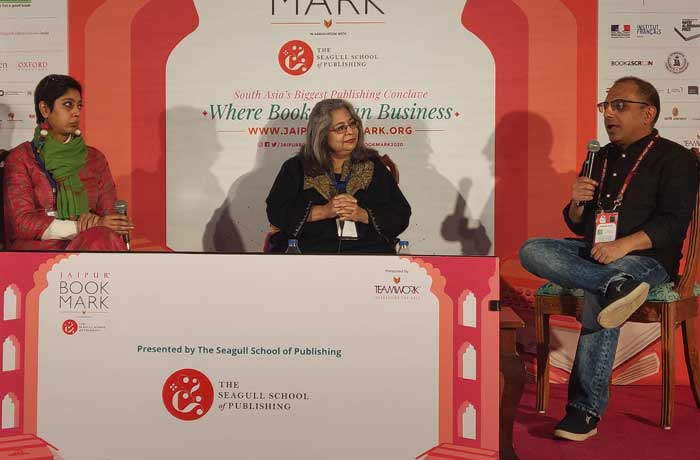 Arunava Sinha and Sunandini Banerjee in conversation with Anjum Katyal

In an engrossing session presented by the Seagull School of Publishing, Arunava Sinha and Sunandini Banerjee in conversation with Anjum Katyal, talked about an unusual and a lesser discussed aspect of translation known as ‘intimacy’. Anjum Katyal, a writer, critic and translator herself, referred the political definition of translation to “an act of urgency that facilitates faster access to books in other languages”. However, the process of translation soon enters an abstract space where things slow down and a relationship with words starts taking shape.

In her opening remarks, Sunandini Banerjee, translator and graphic artist, spoke about the importance of time as a factor that is never generous enough to generate translated content. She mentioned that intimacy was not to be confused with “liking the text”. For her, it was a precursor to adopting, inhaling and getting into the gaps of the text. It was “the natural tendency of the translator to worry that the reader would not get the real meaning and that the text has to be intimate enough to get the emotion of the words as close as it could possibly be”.

Translator Arunava Sinha, started with a humorous analogy related to intimacy: “the art of translation is like making love to a stranger.” He said that translated texts should be able to induce all forms of sensation, and not remain a mere set of lines “generated by a robot”. For him, it was extraordinarily joyful and overwhelming to see his readers experience the same set of rhythms that the original texts would have generated.

The panel then discussed the most common mistake translators make: too much use of italics and breaking into the silence of the original texts. Sunandini explained that even a tweak of a word like ‘said’ into ‘thundered’ had the potential to alter the meaning of the text. It was not always advisable to explain the context explicitly or the implication of a colloquial expression. “When we put out words to explain a subtly written text, we show a sign of disdain for our readers,'' said Arunava, calling it “possibly the worst crime of translation”. He also added that a successful translator must internalise the text, but at the same time, restrict the timely silence between words. This was possible only when we learned to “read and listen better”. As an effective counsel for budding translators and writers, Arunava advised that we should all be led by the text and not the language; only the text can deliver true justice to words and put them into a structure.