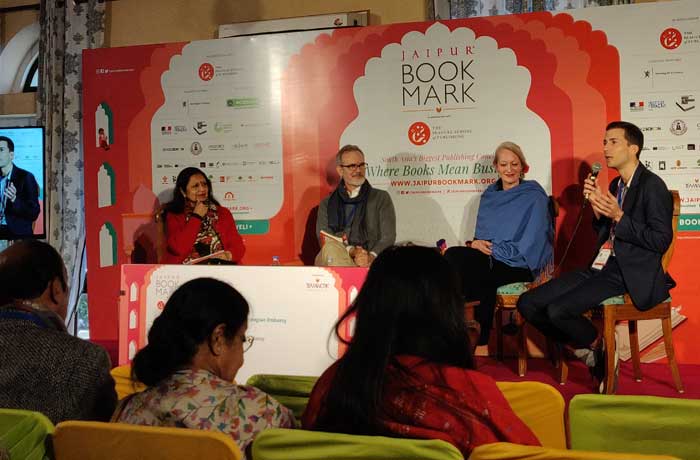 At some point in our lives, almost all of us have gone to a library and picked up a book or two. Eventually, we returned that book and our relationship with the library was disrupted, if not ended. However, very few of us have built a lasting relationship with a library as a space where knowledge thrives in a vibrant community. This was the issue addressed at the session Libraries as Communities which took place on the second day of the Jaipur BookMark 2020. Festival director Sanjoy K. Roy asked the panel, “In these changing times, what is it that libraries should do?”

Public librarian Aspen Walker referred to her work with the Boulder Colorado Library to outline some ideas for what a library should do. She introduced the Library as one that functioned not only as a collection of books; but as a space for exhibitions, cultural activities and social interaction. She quoted library science expert S.R. Ranganathan to say that “libraries are a growing organism” and the cells of this organism were the people who visited it. Thus, a library must always attempt to reach out to people and involve them in its activities.

Across the Atlantic, there is another exceptional library organisation that is shaping the literary culture of its nation- The British Library. Jamie Andrews, Head of Culture and Learning at the British Library spoke about how the library is “both old and new”. Set up only as recently as 1970, he explained that the Library had its roots deeply embedded in British history and culture. Despite it being a “Sisyphean task”, Andrews said that the Library had tried to reach everyone, since it was financed by every British taxpayer. To do so, the Library “engages in various community outreach programs, exhibitions and even fun events like dance nights!” He also spoke about how modern technology was both a challenge and an opportunity. While digitalisation threatens print, technology also allows libraries to preserve their rich collections of books and multimedia much better.

Modern libraries do indeed face multifaceted challenges. University of Chicago Press Director Alan Thomas described the library at the University of Chicago as a very important physical space where people came not just to read but for coffee dates, seminars and to gaze at artwork. Despite the library being an important part of the cultural life at the university, Thomas said that it was increasingly “endangered by private forces” in the publishing industry.

For a lot of us, experiences at libraries are cherished memories. For some, they can be life changing. The panelists told stories from their careers which brought forth the sheer impact that a library can have on an individual. Thomas quoted Elizabeth Acevedo and said that “libraries are radical spaces…where resources are there to be borrowed without the expectation of transaction.” One can hope that reimagining the library as a nerve centre of a community’s cultural life can help preserve these precious spaces.