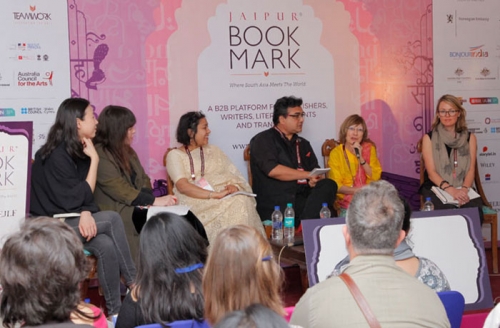 Is every language system a universe in itself? How much of one’s identity is linked to the culture one is born into, or chooses to be a part of? In this age of political strife how do we adequately translate and represent the diverse literatures of minorities and marginalized communities?

These are some of the questions that the distinguished panel of writers, translators and publishers attempted to answer during a session at Jaipur BookMark 2018, which was followed by the launch of Zero Degree Publishing by Ramjee Narasiman.

For Elin Haf Gruffydd Jones, who works in the field of “creative industries” (a term that is definitely an oxymoron, as pointed out by moderator and poet Sudeep Sen), explained that she tries to promote the linguistic diversity of minoritised languages through her writing and translation work: “There is no such thing as a small language but there are languages with small speakers and languages with small creative economies”. Jones discussed how even small creative economies can make a huge impact, citing Welsh poetry as an example: although Welsh has only half a million speakers, Welsh poetry books sell 1000 – 2000 copies on average, whereas poetry written in more mainstream languages struggle to find a market, and may only sell a few hundred copies.

Annie Montaut, a Professor Emeritus of Hindi Language and Literature at INALCO in Paris, agreed, arguing that languages without utilitarian value, should still be preserved and celebrated in world literature. She cited Sanskrit as an example, observing that while Sanskrit no longer has “much functional value” or promise of jobs, it is still frequently translated worldwide.

Anna Cecelia Moulton, the CEO of Magabala Books spoke about the necessity to let indigenous peoples speak for themselves instead of always being “spoken for” by the very white community that colonized, enslaved and disempowered them. To that end, she has ensured that Magabala Books employs aboriginal people from the Kimberley region of Australia on its board of directors. She discussed her collaboration with Adivaani, India’s only Adivasi publishing house, and the need to employ editors who are sensitive to cultural differences and specifics.

But the Deputy Director of the Monash Asia Institute, Mridula Nath Chakraborty pointed out that the “nomenclature of indigenous communities” and translating minoritised literature is a “problematic project” in itself. The evils of colonialism, genocide and slavery cannot be simply erased away, and racism and white supremacy are everyday occurrences. As a result, the empowerment of indigenous communities was of immediate importance, but fraught with delicacy. Such subaltern communities have usually been “spoken for” and represented by white researchers, whose culture and languages are so different from theirs, that the very task of translating their beliefs and cultural concepts into English is problematic. Thus while these communities must be empowered, they must also be represented and articulated on their own terms, without their cultures being appropriated or adapted to suit western viewpoints.

Award-winning writer, Tara June Winch drew attention to the “inherited pain” of the aboriginal community. She talked about how diverse languages and cultures were “extinguished” from the era of colonization onwards, and how the process of “westernization” was so detrimental to the surviving indigenous community. Her first novel  The Impossible Fairytale  details these issues as well as recounts the “struggle of being a fair-skinned indigenous person”

Korean writer Han Yujoo explained that the Korean language is still yet to be established with a proper syntax and grammar, as its spoken and written aspects are very different from each other. Taking advantage of this very quality, she wrote a short story using only “negation verbs,” which had the surreal effect of creating “ambiguous images in the reader’s mind”

Sudeep Sen maintained that while most words and phrases can be translated between languages, there will always be a small percentage of words that cannot be translated, such as the Bengali word “nyaka”. It is therefore sometimes “more powerful to respect the musicality of a word” in its original language, and leave it untranslated.

Although there may be always some things that get lost in translation, it is crucial not to give up, and to strive to represent more democratic and diversified worldviews wherever and whenever possible.