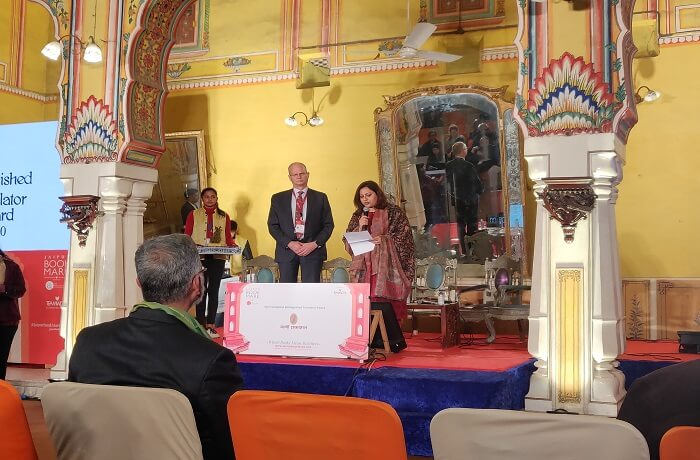 For millennia, ideas have relied on language to travel across borders. What happens when language itself stands in the way of this communication? That is where translators come in. To celebrate the art of translation, Vani Foundation gave the fifth annual Vani Foundation Distinguished Translator Award to Rakshanda Jalil on the first day of Jaipur BookMark 2020. Along with this award, Jalil’s newest book Gandhinama was launched.

Publisher and moderator for the discussion Aditi Maheshwari Goyal began the discussion on the importance of translated works in today’s time. Sanskrit scholar Oscar Pujol spoke about his work on Sanskrit-Catalan dictionaries, which facilitate translation between the two languages. Rajasthani author Anushree Rathore agreed with Goyal by emphasising how “there are 122 languages” in India, and this multiplicity is what makes India beautiful. Publisher Ravi Deecee expanded on this by talking about how Malayalam culture is being shaped actively due to Malayalam being “very proactive in receiving other languages”.

Nationalism is a hotly contested concept and languages play an important part in this contestation. Goyal posed the question, “How do ideas of nationalism travel across languages?” Replying to this, Deecee spoke about the various books that are written on national identity and are translated from Malayalam to other languages. Jalil elaborated by giving the analogy of rivers- just like tributaries contribute to the main river, local languages and dialects shape the national culture. “Why are we not talking to each other?”she asked, while saying that local languages need to converse with each other through translations.

As there was agreement on the vision, the panel talked about policies to implement it. Deecee lamented that “It has been seventy years and we still do not have a National Book Policy”. While the government is one of the players, Rathore spoke about the others. “Publishers should publish at least one translated work every year,” she suggested. Similarly, other stakeholders were talked about before the panel answered the audience’s questions.