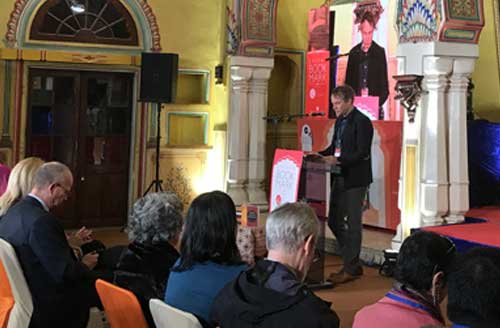 “As long as human beings are around…literature will be there” – Jo Lendle.

The 7th chapter of the Jaipur BookMark, a B2B platform that runs parallel to the ZEE Jaipur Literature Festival 2020, kicked off with the whirling of Rajasthani bagpipers at the Durbar Hall courtyard. The ceremonial lighting of the lamp took place alongside the sounding of conch shells with Festival Producer Sanjoy K. Roy, Festival Director Namita Gokhale, H.E. Hans Jacob Frydenlund, Naveen Kishore, Festival Co-Director Neeta Gupta, Ravi Deecee, the Maharani of Diggi Palace and Urvashi Butalia.

The festival began with Co-Director, Neeta Gupta, addressing the gathering. “I have heard that 7 is a very lucky number!’’, she announced, as she recalled how successfully Jaipur BookMark has been running for the last seven years, acting as a platform to authors, publishers and various other stakeholders from the literary world.

Festival Director, Namita Gokhale, came to the podium and spoke about how JBM has been the very core of the festival. It has been nurturing creative voices through various platforms; such as iWrite, a mentorship initiative for writers. Following her, Sanjoy K. Roy, took the conversation a step further and talked about the iconic Durbar Hall, the cradle of the Jaipur Literature Festival. “This is the heart of the festival… we will carry the sentiment of this wherever we go!” His words resonated with everyone present there. “Translations hold the key to the future of publishing, making new ideas, new voices and undiscovered stories accessible to a larger readership”, he said.

The Embassy of Norway has been a constant pillar of support to the Jaipur BookMark. The Norwegian Ambassador, H.E. Hans Jacob Frydenlund, while addressing the audience, talked about the glory of the festival and its ability to attract an audience equal to the population of his home country. He ended his address with the slogan, ‘’Norway-India Sammen Samaan’’, ‘Sammen’ being the Norwegian word for ‘together’ and ‘Samaan’, which means respect in Hindi.

Writer and publisher Jo Lendle then took to stage to welcome everyone to a new decade in publishing. “This is,” he said, “a good opportunity to ask ourselves who we are- both as an individual and as an industry.” He reminded the audience that it is a time to evaluate expectations and think of a publishing almanac for this year. His ideal publishing almanac would address paradoxes like the author’s position in the world. While an author’s craft requires him to be solitary with the manuscript, he is also expected to be at ease on a public stage after the book is published. This, he said, was also similar to the publisher’s dilemma of simultaneously being guardians of art and players in the global economy.

The almanac would further provide cues for the literature of tomorrow. “Stories will no longer be about entering a new world, but about providing snapshots,'' he quipped. In the future, the publishing industry is predicted to step into literature’s “third-sex”: the territory between fiction and non-fiction. Lendle also highlighted that with digitalisation, publishers are no longer the only ones who provide content to the public. To the delight of the audience, he brought the inaugural keynote to an end by expressing his belief that “publishing is here to stay,'' something that is made evident by the renewed enthusiasm for good, old-fashioned hardcover.