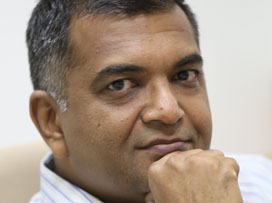 Shyam Parekh founded the Gujarat Literature Festival in 2013 along with a bunch of like-minded friends. After five editions, it has emerged as the largest and the most popular amongst the literary events held in Gujarat. A former editor and a senior journalist with nearly 25 years of experience in different mainstream English dailies, he has worked with DNA since its launch in 2005. As a senior editor of the newspaper, he was in-charge of foreign bureaus and national bureaus. He launched DNA Money as solo editions from Indore and Ahmedabad. This was followed by the launch of Ahmedabad and Surat editions of DNA.