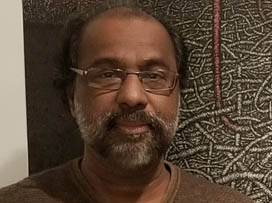 R. Cheran is a Tamil-Canadian academic, poet, playwright and journalist. He has written over 15 books in Tamil. His work has been translated into 20 languages. His latest book is In a Time of Burning. Dr. Cheran is the recipient of the 2017 International Poetry Award from ONVKurup Foundation. His plays in English have been produced and performed in Toronto, New York, Chicago and New Jersey. In Singapore, modern dance group Chowk produced The Second Sunrise, a performance based on his poems. The Second Sunrise was performed at the Singapore International Dance Festival and the Kennedy Center for the Arts in Washington D.C.