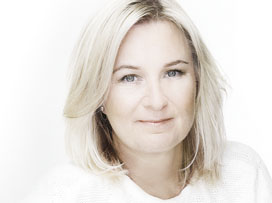 Carin Gerhardsen made her literary debut in 1992 with the philosophical novel Escape of Time. She is the author of a bestselling series of crime novels about chief inspector Conny Sjöberg. These include The Gingerbread House, Cinderella Girl, The Last Lullaby, The Saint, Gideon’s Ring, Her Ice Cold Eyes, Thicker than Water, considered by Apple/iTunes as the best Swedish novel of 2014 and winner of the 2014 Stora Ljudbokspriset as the best crime novel, and The Domino Effect. Her books have been translated into more than 20 languages.