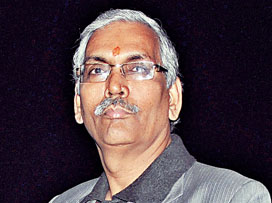 Baldeo Bhai Sharma is a senior media personality and thinker. He took over as Chairman of the National Book Trust, India. He has served as editor of dailies such as Dainik Swadesh, Dainik Bhaskar and AmarUjala as well as the weekly Panchjanyain. This was followed by him taking over as editor of the national daily, Duniya. Sharma is well-known for his appearances on numerous Hindi news channels. He is also associated with various social institutions.