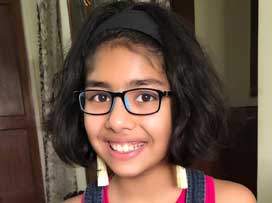 Anoushka Sabnis is a young author and poet. She published her first book, Once Upon a Verse: Because Poems Tell Stories, at the age of ten. Sabnis has been composing stories and poems since she was five years old and has won several inter-school, national and international writing and art competitions. Most recently, she won the Gold Award at the Queen’s Commonwealth Essay Competition in 2018.